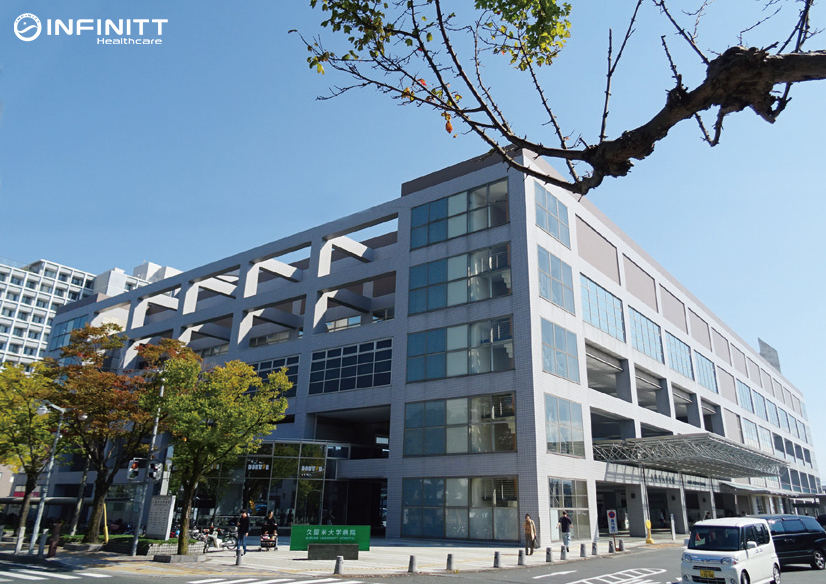 Kurume University Hospital is the central hospital in Chikugo district with approximately 1,000 beds. Since its foundation 87 years ago, it has achieved its ultimate goal of producing a number of excellent physicians. It was the first hospital in Japan to install a heliport with a hangar and a refueling system, with their own Helicopter Emergency Medical Service (HEMS) as well as an emergency center with top-notch facilities. It plays a pivotal role in the community’s emergency care with a record of approximately 500 HEMS operations a year.

Since March 2015, Kurume University Hospital has been using INFINITT PACS to share images across the hospital. INFINITT PACS is also used as an all-around solution in the ultrasound diagnostic center newly established in June 2015. Dr. Abe Toshi from the radiology department, Dr. Kuromatsu Ryoko in charge of examining and reading in the ultrasound diagnostic center and Mr. Nakamura Terumasa from the IT department participated in the process of adopting INFINITT PACS. Below are their explanations on why they selected INFINITT PACS in the first place and the benefits they’ve been experiencing since the adoption. 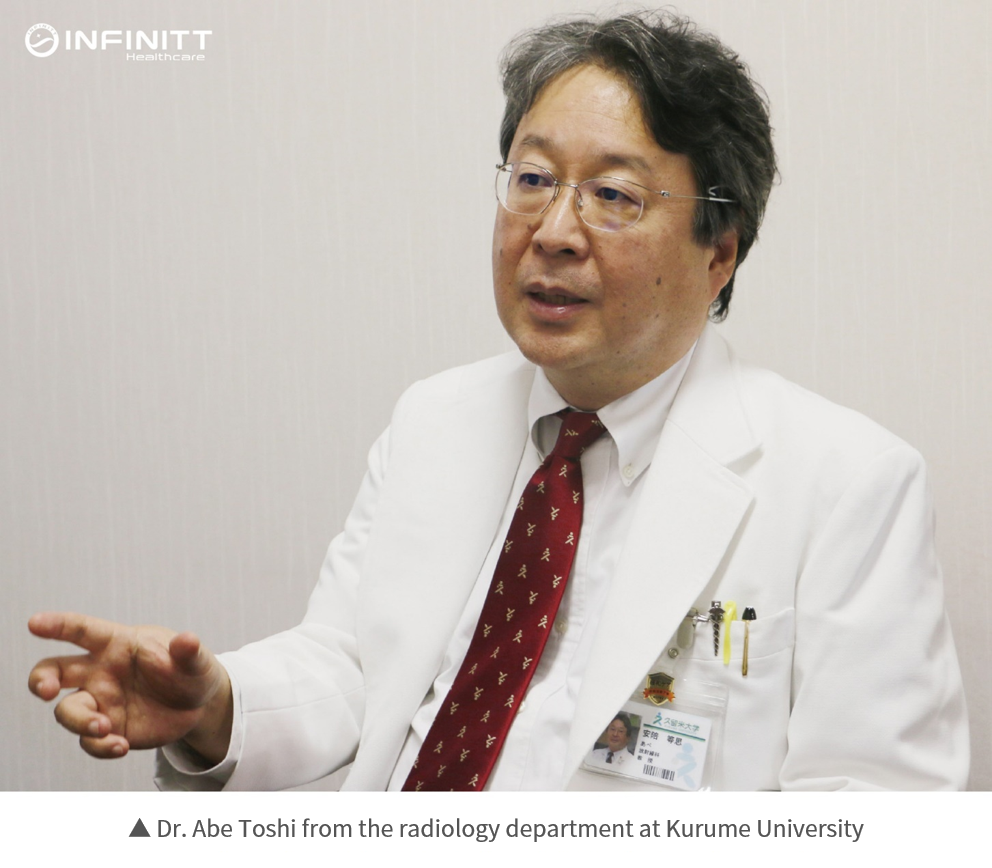 Dr. Abe emphasized the team-based care system arising from cross-departmental cooperation as the competitive edge of Kurume University Hospital. In March 2015, they reached the decision to adopt INFINITT PACS for sharing clinical images and data across the hospital. Its speed and fast image display (JIT loading) made INFINITT PACS appealing. Its image loading speed was the fastest compared to other vendor solutions. The hospital conducted an image loading test by connecting PACS from each vendor to 1,500 Window XP Client PCs in the hospital and comparing the image loading speed. “INFINITT PACS was the fastest in loading the data,” Mr. Nakamura said. Dr. Abe also commented, “The incredible part about INFINITT PACS is that it immediately displayed what I wanted to see the most.” While other PACS start loading from the first image, INFINITT PACS enables users to scroll down and skip to the image they want to see first. Then it starts loading from that image on.

Everything can be accessed from a single viewer

Another critical factor taken into consideration in selecting INFINITT PACS was its unique function to display 3D images on a single viewer. While other vendor PACS open up another screen to display MIP or MPR 3D images, INFINITT PACS displays CT images and produces 3D images from a single viewer. Dr. Abe explained, “I had to open up several screens altogether to view the electronic health records (EHR). It was often very difficult to locate each data. I easily get lost. But INFINITT PACS provides users the ability to view all the information, images and videos on a single viewer screen. It is very user-friendly and easy to navigate. This aspect gives the impression that INFINITT PACS is a high-quality, high-tech solution.”

Kurume University Hospital is currently using two different PACS together, one from GE and one from INFINITT. GE PACS is used for saving original data in the radiology department and for diagnostic readings. On the other hand, INFINITT PACS is used for sharing images across different clinical departments. Dr. Abe explained, “Hospitals usually use one PACS. But using two different PACS has been working quite well for us, because the needs and purposes of using PACS are different for each department.  He also highlighted that “every clinician requires a high-quality PACS. INFINITT PACS meets all the expectations in quality and performance.”

Data migration completed smoothly and in a timely manner

After deciding to adopt INFINITT PACS, the one thing that Mr. Nakamura was concerned about was data migration. The previous server was on lease, and the contract was about to come to an end. Data migration had to be completed before then, or otherwise the hospital wouldn’t be able to adopt a new PACS. A total of 30TB data (6-7 years amount) needed to be migrated. Despite the concern, INFINITT migration tools coupled with the cooperation from GE managed to complete the data migration in only four months and INFINITT PACS could go-live as planned.

Large volumes of data can be accessed internally using ULite

From January 2016, Kurume University Hospital plans to adopt ULite as well. ULite is INFINITT’s HTML-5 based zero-footprint viewer that enables users to access PACS images and report data from any web browsers. Dr. Abe explains the purpose behind ULite adoption, “in the past, if there was an image that physicians wanted to share with their colleagues for peer review, they simply took a photo of it with their phone cameras. But our hospital aims for accuracy in diagnosis based on a huge data pool, so we need a system that enables us to access this data pool whenever and wherever we are.”

Generally, transmitting 1,000 images can be done seamlessly. However, university hospitals like Kurume handle more than 3,000 images. ULite enables users to view such a large quantity of images regardless of where they are—within or outside the hospital.

Furthermore, ULite provides strong security features. Temporary IDs and PWs are utilized to ensure only limited number of users can access and view the data. The data is automatically deleted after a certain period of time, and only data saved in a separate server can be accessed.

Before, each department used to perform ultrasound exams on its own. The gastroenterology department managed stomach exams, the mammography department the breast exams, and the cardiology department the circulatory system exams. However, there were days when certain ultrasound machines were not used at all, which resulted in inefficiency. So in June 2015, a new ultrasound diagnostic center was established for a more efficient sonography workflow.

Currently, the center is operated by ten technicians with physicians from cardiology, gastroenterology and radiology departments serving in shifts. Exams are conducted for circulatory system, lacteal gland, stomach, cervical vertebral, liver, and pediatric cardiology. There are four ultrasound machines for circulatory system, seven for mammary gland, cervical vertebral and liver, and one for the treatment room. Dr. Kuromatsu, a liver specialist in gastroenterology department, commented, “Waiting hours for patients have significantly decreased.”

In the process of selecting a PACS for the ultrasound diagnostic center, performance tests were conducted on several vendor PACS. Dr. Kuromatsu thought that it was especially important that the PACS performed equally well when drafting the reports and when viewing the reports. Another important criteria for PACS was the ability to view 30~40 seconds long Doppler Echo and contrast Echo videos. However, it was hard to find a PACS that supported multi-frame images. It was Dr. Kuromatsu who first found out that INFINITT PACS enabled users to view and compare not only videos but also CT and MRI images. “For instance, it’s easier for patients to understand when we explain which area is problematic while showing still images and videos of CT, MRI, and ultrasound images” said Dr. Kuromatsu. 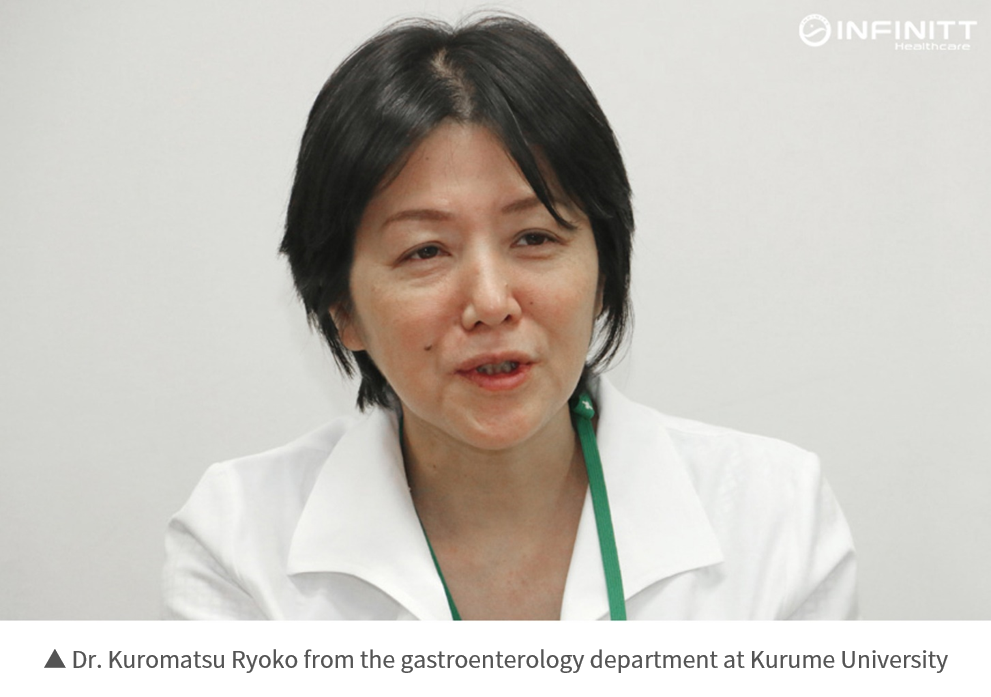 INFINITT PACS is widely used not only in radiology department but also for reading and reporting physiological exams like  endoscopy and electrocardiograms. The reason for its wide range of use is that INFINITT PACS is developed as an enterprise-level data integration and management solution.

On the other hand, INFINITT’s reporting tools are outstanding in drawing schemas of lesions in blood vessels, lacteal glans, blood vessels of cervical vertebral, and more. Considering the differences between the local reporting tool and INFINITT reporting tools, the center allocates the most appropriate reporting template for each Echo. Dr. Kuromatsu explained, “It’s our first time using two different reporting systems. Despite our concerns, the integration with EMR worked well and everything has been quite stable since the go-live.” She also mentioned that INFINITT’s support and training helped them through the initial phase of the implementation.

INFINITT Cardiology PACS is a web-based PACS specialized in the management of echocardiography exam videos. It enables users to view CT, MRI images and echocardiography videos at the same time. Also, it provides the ability to check previous videos before screening and to attach screen captures of a video when reporting. Dr. Kuromatsu said, “INFINITT made it possible to attach video captures in a report. It reduced the overall reporting time as well. We are very satisfied with the changes INFINITT’s solution has brought to our workflow.”

The scope of ultrasonic testing has been expanded to include body surface and orthopedic exams. Kurume’s Ultrasound Diagnostics Center also plans to expand its testing scope to include these areas as well.

CT and MRI exams are still the most widely utilized imaging exams, but it’s true that many difficulties come with CT, MRI exams. For one, there’s a higher risk of radiation dose exposure. The elderly patients, especially, have to hold their breaths for a longer period of time during the screening. There are increasing number of patients suffering from liver disease and patients having to use a pacemaker, and limited number of equipment available for testing. Mr. Nakamura noted, “We are planning to expand the use of ultrasonic testing. However, the total time allocated for a test is limited so it would be critical to increase the work efficiency at the same time. It leaves us no choice but to reduce the reporting time, which we will have to work on.”